Previous
Next
Directed by: Klaus Hoffmeyer | Written by: Sara Stridsberg
A loose imagination of the legendary feminist Valerie Solanas (Ingela Olsson) and the people around her. In 1967, Valerie Solanas writes SCUM Manifesto, the Society for Cutting Up Men. A year later, she fired four shots at pop artist Andy Warhol in his New York headquarters. In the play, we'll see Valerie's path from young intellectual university students for a consumptive prostitute. In addition, we meet Andy Warhol (Simon Norrthon), Valerie's mother Dorothy (Basia Frydman) and her lesbian mistress Cosmo Girl (Noomi Rapace), who has a habit of walking into cars with single men in. The play is a lonely woman's reckoning with the past.
Cast: Ingela Olsson (Valerie Solanas), Simon Norrthon (Andy Warhol), Basya Friedman (Dorothy Solanas), Noomi Rapace (Cosmo Girl), Christoffer Svensson (Paul Morrissey) 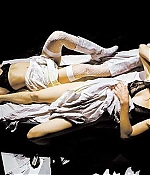 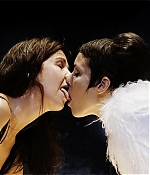