Previous
Next
Directed by: Lisa Langseth | Written by: Lisa Langseth
Lisa Langseth has written the monologue "Den Ã lskade" (The Beloved) about a young woman who makes a class trip and loses her own soul. Katarina (Noomi Rapace) works at Marabou and wins a contest for Opera tickets. She understands nothing really of "Tosca", but decides to conquer this world of tones and emotions. She gets a job as a receptionist at the Concert Hall and starts slowly to enjoy Tchaikovsky and Bach. She devotes her time to catch up with a classic heritage but loses the ability to enjoy the mundane and immediate. The play, a one-woman show for Noomi Rapace, ran for 21 performances. Noomi recalled her experiences and the monologues in "Den Ã¤lskade" in an interview in 2006: "I thought I would die. I tend to dispel the nervousness by concentrating on the others on stage, and think that the audience does not just look at me - but I did not here. Much of the beauty of theater is the great meetings on the stage with the other actors, it is difficult to have a great meeting with yourself. In the end, I try to forget that I was alone. But you must not think that it should be fine, and you must not think of who is sitting in the audience. You have to pretend that they are not there".
Cast: Noomi Rapace (Katarina) 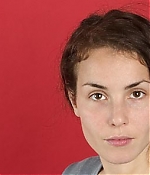 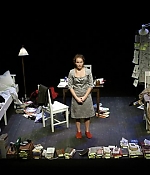 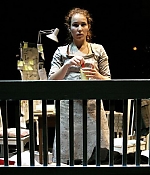 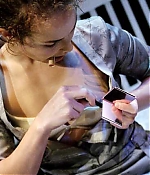 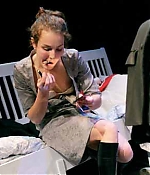