Previous
Next
Directed by: Lisa Langseth | Written by: Lisa Langseth
Christoph (Matthias Silvell), who lives with his mother (Anneli Martini), has dropped out of school after bullying and tough love. Soon, Tarek (James Tamm) arrives, the bully who is in a dangerously bad mood after failing his final grade. He bore not only Christoph, but also takes revenge on the mother Anna-Karin, who has been his schoolteacher. He is helped by his girlfriend, Angelica (Noomi Rapace), who demeans "the ugly" Christoph sexually and dishonors his mother with sadistic games.
Cast: Mattias Silvell (Christoph), Jakob Tamm (Tarek), Anneli Martini (Anna-Karin), Noomi Rapace (Angelica) 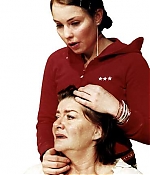