Featured, The Girl with the Dragon Tattoo
Michael Nyqvist, 1960-2017

Some very sad news today, as the family of Michael Nyqvist has confirmed the actor’s passing at age 56. Mr. Nyqvist landed his breakthrough role at age 39, playing Rolf, an abusive alcoholic husband in the 2000 film âTogether.â The Swedish movie about members of a leftist commune in suburban Stockholm in the 1970s led to his first nomination for a Guldbagge, the annual cinema awards in Sweden. From there, Mr. Nyqvist was cast in leading roles on television shows and in films, including as Mikael Blomkvist, the fervent investigative reporter, in the original Swedish adaptation of the book series âThe Girl With the Dragon Tattoo.â He also received bigger parts in blockbuster Hollywood movies, playing a deranged Swedish-born Russian nuclear strategist in the 2011 movie âMission: Impossible â Ghost Protocol.â What better way to celebrate this wonderful actor’s career by re-watching the “Millennium” trilogy anytime soon. Here are some of Noomi’s and Michael’s moments together from the promotional tours of the “Dragon Tattoo” films. 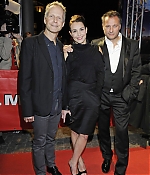 The television version of Stieg Larsson’s “Millennium” trilogy has won the International Emmy Award as Best TV Movie / Mini-Series. Both Michael Nyqvist and Noomi Rapace were nominted in the Best Actor and Actress categories, but didn’t make the cut. Still, a wonderful achievement for their outstanding work!

Replaced the DVD screencaptures of “The Girl with the Dragon Tattoo” with high definition, crystal clear Blu Ray Captures :-) Enjoy! Noomi Rapace has received a nomination for the International Emmy Award as Best Actress for the mini-series version of Millennium! The series has received two more nominations for Best Actor (Mikael Nyqvist) and as Best TV Movie / Mini-Series. This is fantastic news, congratulations to Noomi, Mikael and the crew of “Millennium”. The 39th International Emmy Awards will take place on Monday, November 21, 2011 in New York.

Gallery Updates, The Girl Who Kicked The Hornet's Nest, The Girl Who Played With Fire, The Girl with the Dragon Tattoo
“Millennium Trilogy” production stills update

Today I’ve updated the gallery with pictures from the three “Millennium” films – some have been replaced by high quality versions, others are new to the gallery. For all pictures, click the previews below or follow the text links to directly view all latest uploads. Ten new video clips have been added to the archive, all related to the international promotion of “The Girl with the Dragon Tattoo” and ranging from the early 2009 press conference in Sweden to launch the film trilogy to interviews in France, Germany, Italy and the USA. Click below to watch each video clip. Enjoy! Article courtesy the Hollywood Reporter: A Stieg Larsson confidant shares what happens in the unpublished manuscript thought to be the fourth novel in the ‘Millennium’ series. A close friend of deceased crime writer Stieg Larsson has revealed details of the unpublished manuscript thought to be the fourth book in the global best-selling Millennium series. Larsson confidant Kurdo Baksi told Swedish daily paper the Expressen that Camilla, the estranged twin sister of Millenniumâs goth hacker heroine Lisbeth Salander, plays a major role in the fourth book. Camilla was seen only briefly in the second Millennium novel, The Girl Who Played With Fire.

Baksi is quoted in Expressen as saying the fourth novel is set on the remote Banks Island in Canada and the further deepens the relationship between Salander and investigative journalist Mikael Blomqvist. Baksi, whose book My friend Stieg Larsson was a best-seller last year, added that before he died Larsson completed a detailed introduction and a finale to the fourth book. Larsson died suddenly in 2004, before the three Millennium books were published. But itâs been widely reported that he had plans for a series of five or six books. There is huge commercial interest in continuing the Millennium franchise. The novels were a phenomenal global success, as were the Swedish films based on them, which launched the career of actress who played Salander, Noomi Rapace. The Hollywood adaptation of the books – The Girl With The Dragon Tattoo, directed by David Fincher and starring Rooney Mara and Daniel Craig – hits theaters Dec. 21.

Larssonâs long-time partner Eva Gabrielsson has said she has a large part of the manuscript for the fourth novel on a computer in her possession. But Gabrielsson, who was not formally married to Larsson, is in a bitter fight with Larssonâs family over Millennium royalties and has so far refused to make the unfinished manuscript public. In Stieg and I, her biography of her life with Larsson, Gabrielsson gave the fourth book the working title Godâs revenge. She has been quoted as saying she could finish the novel on Larssonâs behalf. So far, however, Larsson’s publishers – in Sweden and internationally – have said there are no plans to publish a fourth novel in the series.