The television version of Stieg Larsson’s “Millennium” trilogy has won the International Emmy Award as Best TV Movie / Mini-Series. Both Michael Nyqvist and Noomi Rapace were nominted in the Best Actor and Actress categories, but didn’t make the cut. Still, a wonderful achievement for their outstanding work!

As previously reported, Noomi Rapace won the Best Actress award for “Babycall” at the International Rome Film Festival, yesterday. Pictures from the closing ceremony, the award winners photocall and the award winners dinner have been added to the gallery. Edit: Additional images were added with thanks to Emma! 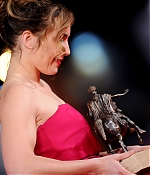 Great news! Noomi has won Best Actress for “Babycall” at the International Rome Film Festival! She has attended the awards ceremony, so check back for pictures.

Beyond, the feature debut of actress-turned-director Pernilla August starring Noomi Rapace has won the Nordic Council Film Prize, Scandinaviaâs top cinematic honor. Oscar-winning actress Helen Mirren, the honorary chair of the film prize jury, announced the winner at a press conference in Denmark Monday. Based on the best-selling, semi-autobiographical novel by Susanna Alakoski, Beyond is the story of a girl growing up in 1970s Sweden to alcoholic parents. In addition to the Nordic Council honor, which will be presented Nov. 2, Beyond has already collected a stocked trophy case of awards, including best director and best supporting actress (for Outi Maenpaa) at Swedenâs equivalent of the Oscars, the Guldbagges, best film and best actress honors at the Sao Paulo film festival and the International Criticsâ Week honor at the Venice Film Festival in August.

Noomi Rapace has received a nomination for the International Emmy Award as Best Actress for the mini-series version of Millennium! The series has received two more nominations for Best Actor (Mikael Nyqvist) and as Best TV Movie / Mini-Series. This is fantastic news, congratulations to Noomi, Mikael and the crew of “Millennium”. The 39th International Emmy Awards will take place on Monday, November 21, 2011 in New York.

Awards, Beyond
“Beyond” selected as Sweden’s Official Oscar Entry

Great news courtesy Variety. Pernilla August’s directing debut “Beyond” has been selected as the Swedish entry for the Oscars. Set in the present day and the 1970s, the film stars Noomi Rapace in a drama about a woman confronting memories of her troubled childhood. August wrote the script with Lolita Ray, based on the novel by Susanna Alakoski. It premiered at last year’s Venice Film Festival, where it won two awards, and has since picked up prizes at several other fests, including Sao Paolo, Lubeck and Hamburg. It was nominated for eight Golden Bugs, Sweden’s national film awards, and won three, including best director for August. August previously won two Golden Bugs as an actress, as well as the best actress prize at Cannes in 1992 for “The Best Intentions.” She is perhaps best known to English-speaking audiences as Anakin Skywalker’s mother in the “Star Wars” movies. Noomi has received a Best Actress nomination at the 2011 Empire Awards. She shares the category with Natalie Portman (Black Swan), Emma Watson (Harry Potter And The Deathly Hallows Part One), Olivia Williams (The Ghost) and Helena Bonham Carter (The King’s Speech). The Girl with the Dragon Tattoo is also nominated as Best Thriller. You can pick your favortie at the Empire Online’s official website.

Lots of additional pictures from yesterday’s BAFTA Awards, as well as its after parties, have been added to the gallery.