The French theatrical trailer for “What Happened to Monday?” – called “Seven Sisters” internationally – has been released today and it looks amazing! In a world where families are limited to one child due to overpopulation, a set of identical septuplets (all played by Noomi Rapace) must avoid being put to a long sleep by the government and dangerous infighting while investigating the disappearance of one of their own. Rapace is joined by Willem Dafoe and Glenn Close, so that’s not bad company either. Check out the trailer in the video archive. The French poster and new production stills have been added to the photo gallery. 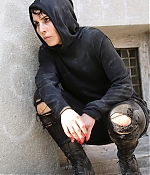